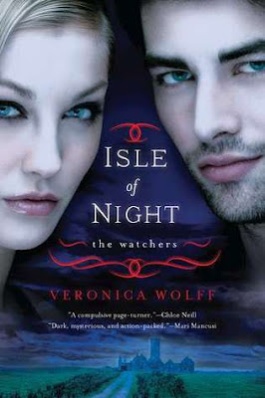 Is life offering fewer and fewer options? Then join the dead.
When Annelise meets dark and seductive Ronan, he promises her a new life-if she has the courage to chance the unknown. Now, she’s whisked away to a mysterious island and pitted against other female recruits to become a Watcher-girls who are partnered with vampires and assist them in their missions. To survive and become a Watcher, Annelise has to beat out every other girl, but she’s determined to do so, because to fail doesn’t mean dishonor-it means death.

IF YOU’RE GOING TO BE PARTNERED WITH A VAMPIRE, YOU HAVE TO WORK THE NIGHT SHIFT.

By her wits, blood, and sacrifice, so far Drew has survived the intensive training on the Isle of Night. As a second-year Acari, her ultimate goal is to become a Watcher, and now she has a shot at her first mission. Except nothing is as it seems. The vampire Alcántara is as sinister as he is sexy, Ronan is more distant than ever, and it turns out there are other vampires out there. Bad ones.

Ancient, bloodthirsty, and powerful, these undead are really old school. They’ve captured one of the Watcher vamps and are torturing him for information. The only chance to save him is to infiltrate a major summit the baddies are holding on their own island. There will be mortals there, serving as butlers, maids, and various hired help. Drew had better brush up on her skills as a serving girl, because she’s about to go undercover…

But, when their vampire prisoner turns out to be a gorgeous bad boy, Drew’s first mission quickly turns into more than she bargained for…

(From Goodreads.com)
I have to say that I’m in love with this series! Drew is such a strong character, who has to overcome the obstacles of her life. She’s a fighter and she keeps on fighting. I like her consistency throughout the book, struggling to free herself from the bullies of the world. She’s one of those characters that you can relate to, even though she’s part of a supernatural world.
Ronan is…oh goodness…is…just perfect. I’m team Ronan all the way! I love the way Ronan and Drew’s relationship develops. It’s not love at first sight for them, they work at becoming something other than strangers. Sometimes I think that aspect is overlooked in books because we dive right into the romance aspects. But in this story, I was right there with Drew wondering if Ronan is more than just a protector, if they can be something other then Acari and Tracer.
In the second book, everything I loved about book one is there but also, everything changes. New characters are introduced that throw a spin into the world that Drew is just beginning to understand. Both books are action packed and fast pasted. I love seeing Drew kick some serious butt. Her friends Emma and Yas are a great addition to the list of characters, and its fun watching them interact.
I also enjoyed the aspect of vampires being the hungry monsters rather than teenage heartthrobs. Veronica went a little farther back in her vampire lore, creating a creature that is to be feared, but who also stays intriguing.
Overall, this series requires a reading! If you enjoy action packed, relationship driven, mythology loving stories, The Watchers is a series for you. I’m dying to know what happens in book 3 (even as I’m terrified after some of the events in book 2). Vampire’s Kiss, book 2 in the Watchers series hits shelves March 6th!
Have you read this series? What are your thoughts?
Happy reading,
Valia

2 replies to Series Spotlight: The Watchers by Veronica Wolff