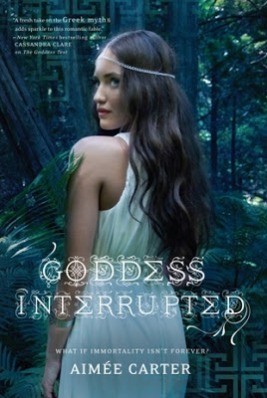 But if she wants a life in the Underworld with Henry, she’ll have to fight for it.

Becoming immortal wasn’t supposed to be the easy part. Though Kate is about to be crowned Queen of the Underworld, she’s as isolated as ever. And despite her growing love for Henry, ruler of the Underworld, he’s becoming ever more distant and secretive. Then, in the midst of Kate’s coronation, Henry is abducted by the only being powerful enough to kill him: the King of the Titans.

As the other gods prepare for a war that could end them all, it is up to Kate to save Henry from the depths of Tartarus. But in order to navigate the endless caverns of the Underworld, Kate must enlist the help of the one person who is the greatest threat to her future.

Goddess Interrupted starts out at the end of summer vacation James and Kate took together. She’s anxious to get back and see Henry, her husband. When she steps back into the palace she is transported to the Underworld and that’s where the real fun starts.
This book takes off in a flury of action and emotional rollercoasters. Kate is desperate to have Henry show his love for her, while she feels like she shouldnt even be there. I liked seeing Kate’s character develop into someone worthy of a wife and a Queen. Yes, in the first book she had to overcome tests deeming her worthy but in book two she realizes these things for herself. She stands up for what she believes, and she is willing to sacrifice herself for those she loves. Especially Henry.
Oh, Henry. I didn’t feel like his presence was as evident in this book (which I honestly missed) except through Kate. We watch her struggles, yerning for his love, but we don’t see much of his. At least not till page…*fans self* I shall leave you hanging on that one because you will just have to read it for yourself. Make no mistake, I am definetly a Henry supporter. We learn a bit more about him in book two and his story might break your heart.
Overall, I enjoyed all the characters and getting a bit of history on them. It was fun watching them interact. Kate and Henry’s relationship is beautiful and heartbreaking and they fight to overcome obsticle before them with determination.

And that ending, oh goodness that ending will leave you weeping and begging for more. This story has truly touched my heart, and I can’t wait to read what happens next!


Let me know what you think!