I hope everyone is having a wonderful New Year! Today, I have a special guest! Take it away, Sue Duff!

I am sooo excited to be a guest on Valia’s site! Thank you for the opportunity to hang out with your readers Valia, and share a bit about myself and some insight into my series, The Weir Chronicles.
I stumbled, well more like tumbled, my way into writing a few years ago. I had a skiing accident and was laid up all summer recuperating. Since I’m normally a very active person, I was climbing the walls from boredom, so I turned on the word processor to keep myself sane.
Approximately fifty-nine days later, I had a gargantuan novel! Once I began typing, the story and characters had taken on a life of their own and by the time I was done with the first draft, I envisioned five novels total in the series. Of course, the first draft SERIOUSLY needed some revisions and a boatload of editing, but I truly believed I had an awesome story on my hands. So, I dove into the world of writing and took a creative writing class. That gave me the confidence that I could do this if I wanted it bad enough! I then joined a writer’s critique group, signed up for any writing courses that made sense with my work schedule and measly funds, and lo-and-behold, two years later, that novel placed as a finalist in a prestigious writing contest. Yep, you guessed it. I drank the Kool-Aid and haven’t looked back since.
Then the real work began. I started cranking out the next novel, then the next, and the next. In two years, I now have the fourth novel in the series hitting shelves February 1st, with an anthology of unrelated short stories also published last spring, and another one on the way April 2017.
What kept me from pulling my hair out and took over my life, you ask? The Weir Chronicles follows Ian Black, a popular illusionist who harbors a mega secret. He has real powers. Hailing from a magical race of beings that keep the energies of the earth in harmony, he was destined to inherit all of their combined powers and, thus, save Earth from self-destructing. But he doesn’t, and after a miserable childhood, he leaves the Weir to their archaic ways and hides among humans, becoming an illusionist to perform magic on a different scale. But destiny has a way of catching up with us all and as the series progresses, Ian is sucked back into the world of the Weir, and drags his goofy manager, hard-nosed girlfriend and overly protective guardians with him for one hell-of-a-ride.
I hope you discover your true destiny as Ian has, and as I have. I never imagined I’d end up as an author, but thanks to a skiing accident, and the magic of our computer age, my fate eventually caught up with me. May you all be so lucky!
Thank you again Valia for inviting me into your circle of followers, and I hope everyone can escape into the pages of your next great series! 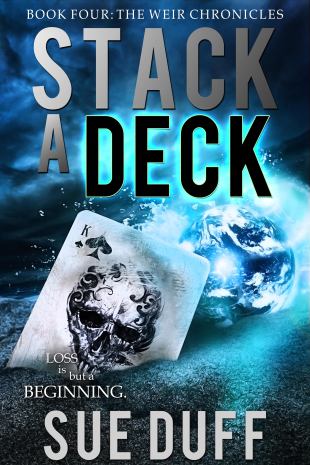 DENVER, CO —   What if the Earth’s ozone layer decayed? What if asteroids weren’t destroyed by outer atmosphere and impacted us on on a regular basis? And what if the Earth’s core slowed its rotation, leaving our planet completely out of sync with the gravitational pull of the moon? Bestselling author Sue Duff explores these terrifying questions in her latest installment of her urban fantasy series, Stack a Deck (Book Four in The Weir Chronicles).

As the epic story continues, Duff’s main protagonist Ian Black learns how dangerous tyrannical ruler Aeros has become, and sees for himself the narcissist’s impact on an entire planet. Ian is forced to turn his back on the Pur Weir and align himself with the rebels to rescue Rayne. But when he travels to Earth’s alternate universe, he finds himself powerless and struggles to survive. Though, it is here that he, along with eager readers of the series, finally discover the true history of the Weir and his connection to Earth’s imminent destruction.   “Stack A Deck was so challenging because I had to consider the worst future for Earth and ask the tough ‘what if’ questions,” said Duff.

Stack a Deck is the fourth of five books in the Weir Chronicles, so fans of Duff’s novels can anticipate an exciting close in the final chapter in 2018.

Out of hundreds of submissions, Duff’s novel Fade to Black placed as a finalist in the Colorado Gold Writing Contest in 2011 and in 2015, her writing earned her the PEN Award from Rocky Mountain Fiction Writers.  Masks and Mirrors nabbed Duff a nomination for the 2015-2016 Independent Writer of the Year from Rocky Mountain Fiction Writers, and Sleight of Hand landed on the Denver Post Bestseller list in 2016.

Additionally, Duff has completed a short story entitled Duo’vr for the anthology TICK TOCK: Seven Tales of Time, which received the gold medal for Best Book Cover and silver medal for Best Anthology for the 2016 Colorado Independent Publishers Association EVVY Awards. The anthology also  was nominated for Best Anthology at the 2016 UTOPIA Con. A second anthology is on its way in 2017 and, in addition to the seven Wicked Ink authors short stories, it will feature two short-stories hand-selected from over 45 submissions received from writers all over the world.