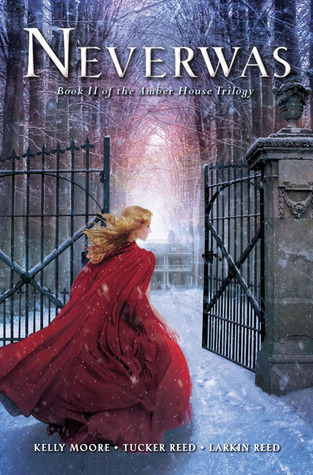 “I was sixteen the second time I had my first kiss….”

At the end of AMBER HOUSE, Sarah made a choice that transformed everything–and now she must choose it all again.

Things are very different–better–for Sarah and her family: her Aunt Maggie grew up; her parents are happily married; her grandmother died after a long, productive and respected life. But other things are different too, and not for the better.

After growing up in the free country of the Pacific Northwest, Sarah Parsons has settled in at Amber House, the stately Maryland home that’s been in her family for generations. But the world surrounding the House feels deeply wrong to Sarah. It’s a place where the colonists lost the 1776 Insurrection, where the American Confederation of States still struggles with segregation, and where Sarah is haunted by echoes of a better world that she knows never existed.

Her friend Jackson shares these visions of a different world–and together, they manage both to remember the way things ought to be, and to plan a daring mission that will reset the universe once again. Sarah must figure out what has changed, and why, and how she can fix it–how she can find her way to another otherwhen.

Neverwas is book two in the now trilogy of Amber House. If you guys remember, I reviewed book one last year and for me, it was a unique kind of a read. Well, Neverwas is like that. It’s a story that is different and otherworldly.
The story picks up where we left off in book one, however, it’s not the story that we know. This is a different universe, the choices of Sarah in book one changed the world that she knew. This part of the book was a  bit difficult to wrap my mind around. There are certain issues that are predominant in this book and they’re not too pleasant to read about. Sarah has much to learn, about herself and the world around her, in order to become who she needs to be.
This book is different from the first one, but still deals with family and the consequences of the choices we make. Yes, the whole different reality because of one small thing in book one is very hard to believe, but this is a supernatural kind of a story so anything is possible really. More than anything, for me, this book read almost like a completely different story. It’s been a while since I read book one, so a few of the aspects I didn’t even remember. You honestly may even be able to read this as a stand alone.
Neverwas is an interested story. I liked Jackson in this one much more than the last book. Sammy is still Sammy, and Sarah still works at protecting him from the world. Overall, Neverwas is definitely a different kind of a sequel, full of characters you’ve met, but never seen quite like this.

In NEVERWAS, Sarah must piece together the mystery of her forgotten past with the help of clues left behind by her great-grandmother, Fiona Warren.  For readers interested in the chance to win a signed first-edition hardback of NEVERWAS — with an exclusive hint for what’s in story for Sarah in the final book, OTHERWHEN, hidden inside — visit each blog on the tour for the month of December, collect the various lines from the poem, arrange them in the proper order, and submit the final sonnet by January 10th for a chance to win the special copy of NEVERWAS!

KELLY MOORE is a New York Times best-selling author, former litigator, and single mother of three. Her latest project, the young adult fiction series THE AMBER HOUSE TRILOGY, co-written with her two daughters and based loosely upon her own family history, examines fourteen generations of Maryland women and their ties to the past, present, and future.  The first book in the series was nominated for the 2014 Dolly Gray Children’s Literature Award for its realistic portrayal of characters with autism; Moore is outspoken about her inclusion in the autism spectrum, and is dedicated to autism awareness.

TUCKER REED is an award-winning fiction and nonfiction writer.  She has been recognized on the national level for her short stories, essays and poetry.  She is also a notable political blogger and has appeared on CNN, CBS, ABC and HuffPost Live, as well as featured in articles published by TIME magazine, Marie Claire magazine, Ms. magazine, The Washington Post, The Los Angeles Times, and The Guardian, among numerous others.

LARKIN REED is a professional photographer, currently pursuing a Bachelor of Arts degree in filmmaking. In 2013, Reed established her own multimedia production company, and has subsequently produced and directed several short films.

BLOGS TO VISIT ON TOUR: